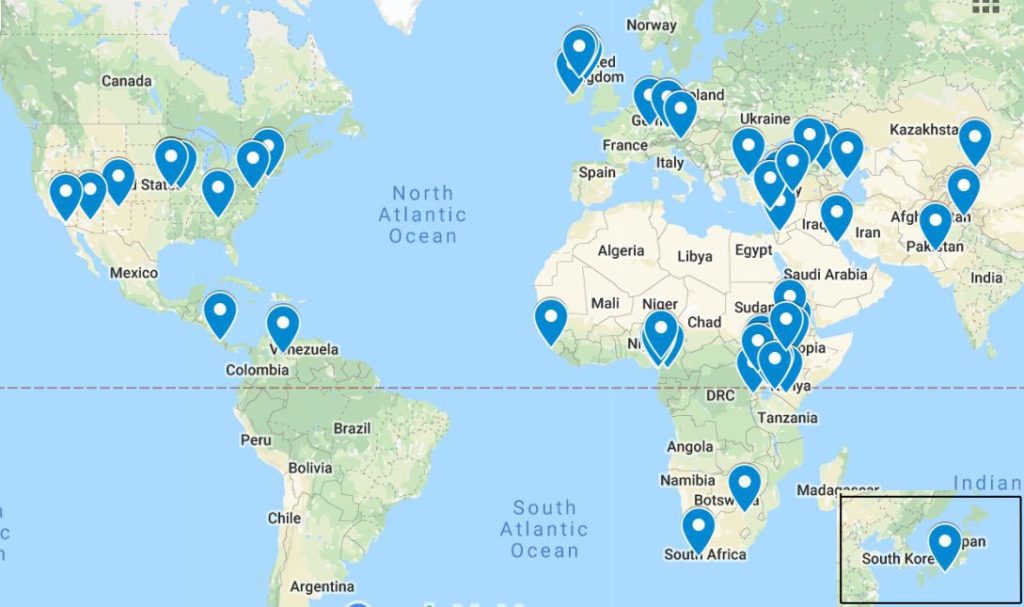 Northern Ireland Peace Journalism Project-May and October-Prof. Youngblood met with journalists and academics and gave workshops at several universities to discuss the prospects for PJ in Northern Ireland. The project is sponsored by a US Embassy-London grant.

World Forum for Democracy—In Strasbourg, France, Prof. Youngblood presented, “Disinformation, Democracy, and the Peace Journalism Solution.” The event was sponsored by the Council of Europe.

Senior Subject Specialist in Ethiopia, January-May. Prof. Youngblood taught classes at the University of Gondar, and lectures on peace journalism throughout Ethiopia.

Greater Kansas City Peacebuilding Conference, October, 2018. One day of the conference was dedicated to peace journalism, and Prof. Youngblood presented “Radio and Peace in East Africa.” He was also co-organizer of the three day conference.

Peace Journalism: An Introduction–Addis Ababa and Jimma, Ethiopia, July 2017. As a U.S. State Department Speaker and Specialist, Prof. Youngblood made presentations at two universities and in several public forums.

Peace Journalism and Health Reporting-Freetown, Sierra Leone, November 2016. Meeting with 30 journalists, the center’s director discussed the basics of peace journalism and their own reporting on the Ebola crisis.

Reporting Syrian Refugees—Building Communities of Understanding—Adana, Malatya, and Istanbul, Turkey. January 2015, May 2015, and November, 2015. Youngblood conceived, coordinated, and taught peace journalism seminars for Turkish students and professional journalists about how to responsibly report about refugees. The project was sponsored by the US Consulate-Istanbul and the US State Department.

The center’s director traveled to Kashmir to work on a peace journalism project with professional journalists and with students and faculty at the Islamic University of Science and Technology in Awantipora. See the Peace Journalism Insights blog for more information.

Working on a State Dept grant, the center presented seminars in Adana, Turkey and a summit in Istanbul, Turkey designed to improve reporting about Syrian refugees in Turkey. See the Peace Journalist magazine for more details. The project will continue in Malatya, Turkey in October.

The center’s director traveled to Rongo University (Kenya) to conduct seminars and workshops with a peace theme. Multimedia products detailing the project include audio stories and a photo album.

Peace Journalism project in Cyprus. This included lectures at Eastern Mediterranean University, and a Peace Journalism and Migration seminar at the Cyprus Community Media Centre in the buffer zone in Nicosia. For more, see the April 2014 Peace Journalist magazine.

The center’s director participated in the Sustained Humanitarian Presence Initiative workshop, sponsored by Irish AID and the Swiss Agency for Development and Cooperation. This workshop in Limerick, Ireland for NGO leaders was the first part of a larger project to develop a course to help NGO’s operate more effectively in a crisis area. Steven Youngblood’s  instructional segment at the workshop centered around how NGO’s might most effectively utilize media in a crisis zone.

Symposium-“Doing the Wrong Thing: The Struggle for an Ethical Media,” held at Park University. Video of the event is archived at at http://portal.stretchinternet.com/parkadmin/.

“The Crisis in Mexico: Is Peace Journalism Possible?” A special symposium was held on Feb. 22 at Park University. The event was co-sponsored by the U.S. Institute of Peace in Washington, D.C. Expert panelists includes Cristina Zesatti (Zacatecas, Mexico), and Mary Sanchez (Kansas City Star).

Symposium-“Doing the Wrong Thing: The Struggle for an Ethical Media,” held at Park University.

“The Crisis in Mexico: Is Peace Journalism Possible?” A special symposium was held at Park University. The event was co-sponsored by the U.S. Institute of Peace in Washington, D.C. Expert panelists includes Cristina Zesatti (Zacatecas, Mexico), and Mary Sanchez (Kansas City Star).

Peace media/counterterrorism project–A peace media and counterterrorism program launched in Dec., 2011 and continued in 2012. The project brought together media and security officials to in Uganda to establish frameworks of cooperation on anti-terrorism efforts. It was funded with a $150,000 State Dept. grant.

Peace and Electoral Journalism project, Uganda-The 11-month project featured dozens of seminars held throughout Uganda to encourage peace journalism style reporting of the 2011 election. Trainers, including Prof. Youngblood, traveled 14,000 km to ever corner of Uganda to teach. The project was sponsored by a $270,000 State Dept./USAID grant.