Park University, which has supported U.S. military service members since 1918 when it accepted students who were inducted into the War Department’s Student Army Training Corps, is stepping in to assist active duty U.S. service members who may be impacted by restrictions on federal tuition assistance. Park University understands the challenges these students face and has offered its support by announcing that it will waive the tuition of one class (up to three credit hours) for any active duty service member, guard or reservist who is enrolled with the University for its Fall semester or Fall I term, which begins on Monday, Aug. 19, after tuition assistance, GI Bill® benefits and federal student aid benefits have been exhausted. For new military students, the University also waives the admission fee for all members of the military.

Active duty service members can take advantage of this offer by enrolling online at military.park.edu or by calling the University’s Office of Admissions at (888) 319-9522. Questions about the offer should be referred to Sarah Weygand, director of military and veteran student services, at sweygand@park.edu or the Park Global Warrior Center at warriorcenter@park.edu. Read more at park.edu/news/military-assistance.

Park University and Moi University in Eldoret, Kenya, have signed a memorandum of understanding that will provide for international collaboration between the two schools. The objective of the MOU will provide academic exchanges between students, faculty and staff, and possible joint research programs of mutual interest. Representatives from Moi University, a public school with more than 30,000 students in Kenya, visited Park University’s flagship Parkville Campus on May 26 with Park President Greg Gunderson, Ph.D., and Moi’s Vice Chancellor Isaac Kosgey, Ph.D., signing the MOU.

The American Midwest Conference has announced that the Park University softball team is its inaugural Women’s Champions of Character Team. The award recognizes exemplary character and sportsmanship on the field, on campus and in the community, and is awarded to coincide with the newly created NAIA Conference Commissioners Association Champions of Character Teams. This team demonstrates the core values of integrity, respect, responsibility, sportsmanship and servant leadership. During the 2018-19 academic year, the softball team racked up 278 hours of community service in the Kansas City area. The events ranged from serving at the Platte Senior Citizen cleanup day in the fall and spring, volunteer days at KC Pet Project and aid in Millhouse Thunder Softball activities and learning experiences. Read more at parkathletics.com/article/2854.

The heart and soul of Park University lies within the spirit of the people who represent the institution in the classroom and community. The Office of University Engagement’s new “Park Stories” initiative showcases fun and inspiring features highlighting Park University students, faculty, staff and alumni. These stories will be shared periodically in The Crow’s Nest. The edition’s installment highlights Ashley Jones, head coach of Park’s esports team. Read about Jones at advancing.park.edu/a-league-of-her-own.

Kenny Broberg, graduate student in the International Center for Music, won third prize at the prestigious International Tchaikovsky Competition in Russia, held June 17-27. For his efforts, Broberg received a bronze medal and a $10,000 cash prize. View Broberg’s performances at tch16.medici.tv/en/.

Brad Biles, director of communications and public relations, was honored by the American Legion Boys State of Kansas as its 2019 Advisor of the Year at the conclusion of its recent session in Manhattan, Kan., on June 7. Biles serves as the organization’s public relations director in a year-round volunteer role. 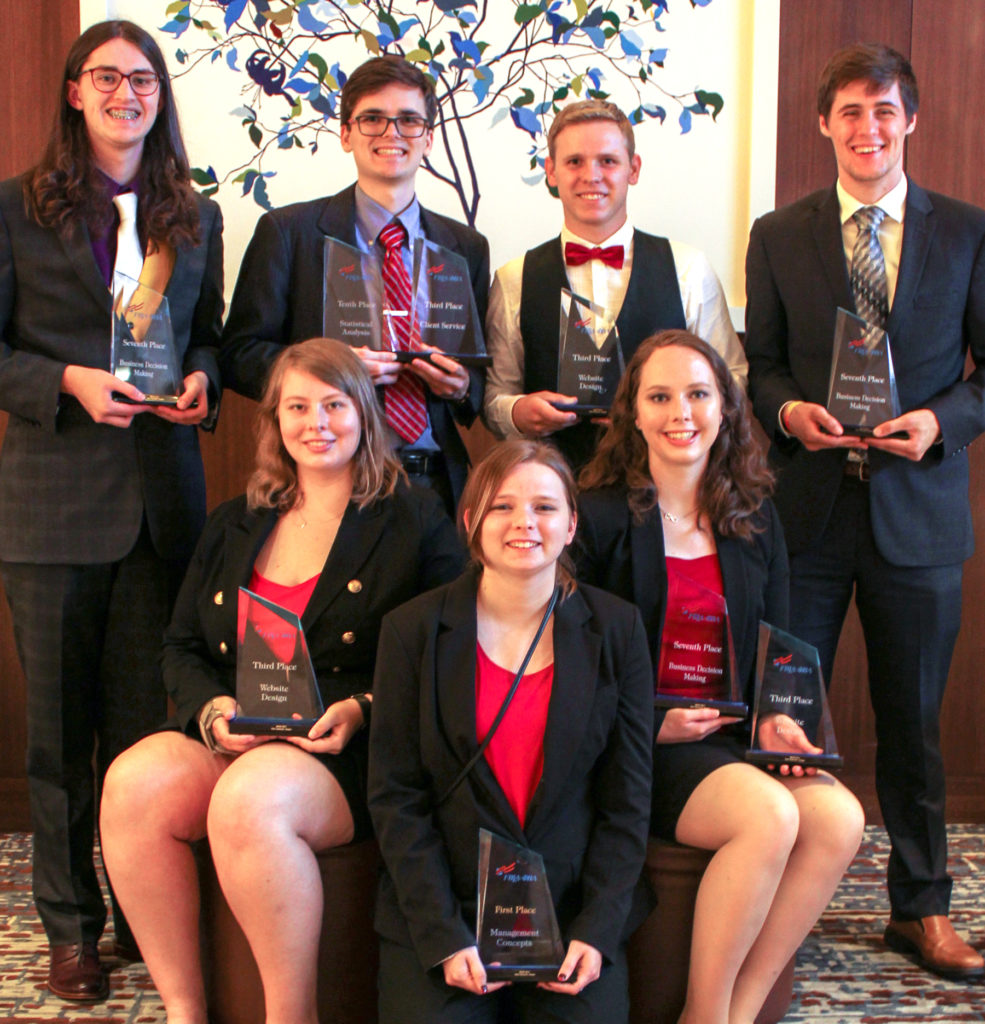 Kirby Brown, dean of the College of Management, provided a military affairs update to Congressional staffers during a Greater Kansas City Chamber of Commerce Spotlight visit on May 30. Brown’s discussion included information on the Veterans Affairs’ Mission ACT and the 2019 military policy agenda.

Robert Kao, Ph.D., associate professor of economics, presented a roundtable discussion on “Preparing Today’s Students for the Digital Economy” at the Global High-End Manufacturing Summit in Changsha City, China, on May 14.

Park University’s recent Titanic exhibit that was showcased by the Frances Fishburn Archives and Special Collections, was highlighted in a podcast that aired on DannyClinkscale.com on May 31. Carolyn Elwess, University archivist, was interviewed for the 35-minute program.

James Nelson, associate vice president of information technology services, provided comments for a story that was published in the June issue of University Business magazine. The article focused on the use of voice technology in higher education.

A story about the Negro Leagues Baseball Museum in Kansas City, Mo., which is led by its president, Bob Kendrick, ’85 (and 2013 recipient of Park’s Distinguished Alumni Award), being selected as the 2019 American Business Awards Organization of the Year in the Small Nonprofit/Government category, appeared on WDAF-TV in Kansas City on June 10.

Arcy Muñoz, ’10, was recognized by the Houston Business Journal as a 2019 “40 Under 40” honoree on June 13. A story about Muñoz, who serves as the community relations manager for Houston First Corp., appeared in the HBJ on June 14.

Charlotte Barksdale, co-chair of Park University’s Civic Advisory Council, will be recognized by the Kansas City Business Journal as a member of its 2019 class of “Women Who Mean Business” during a luncheon on Aug. 23. An article about the class appeared in the KCBJ on June 14.

Steve Youngblood, associate professor of communication arts and director of the Center for Global Peace Journalism, authored a response “letter to the editor” related to immigrant detention centers that was published in the Los Angeles Times on June 15.

A story about Col. Lewis Millett, ’63, who received the Medal of Honor in July 1951, appeared on the blog “The Melting Thought” on June 18 as part of a “Profiles of True Heroes – Military and Law Enforcement” feature.

Tim Westcott, Ph.D., interim dean of the College of Education and Health Professions, associate professor of history and associate university archivist, and Ashlyn Weber, senior history/public history major, participated in a live interview segment on “41 Action News Midday” on KSHB-TV in Kansas City on June 19 related to the Valor Medals Review project. In addition, Westcott appeared on KCUR-FM’s “Central Standard” in Kansas City that same day to also discuss the project (interview begins at approximately 40:30). Westcott, Weber and Josh Weston, sophomore European/classical history major, were all interviewed for a story about the project that aired on KMBC-TV in Kansas City that evening. KCUR also added a story to its website on June 23 with comments from Westcott and Weber.

A photo of Park University First Lady Laurie Gunderson accepting a $1,000 check from the Parkville Rotary Club for the University’s Pirate Pantry appeared in the June 19 issue of the Platte County (Mo.) Citizen.

The Park University International Center for Music’s upcoming 2019-20 concert season was highlighted in an article that was published in the June 23 edition of The Kansas City Star.

Kay Barnes, senior director for university engagement, provided comments for a story that was posted on KCUR-FM on June 24. The article highlighted the advice the former mayors of Kansas City, Mo., would provide to recently elected Kansas City mayor Quinton Lucas. Barnes served as mayor of Kansas City from 1999-2007.

Scott Hageman, associate professor of geology and associate dean in the College of Liberal Arts and Sciences, was interviewed for a story that aired on KSHB-TV in Kansas City on June 24 related to the number of sinkholes that have popped up in the region due to the numerous rain events in recent months. Hageman was also interviewed by KMBZ-FM in Kansas City on the same subject.

A podcast focusing on the artwork of JT Daniels, ’11, appeared on the website for Northeast (Kansas City, Mo.) News.

Stories related to International Center for Music graduate student Kenny Broberg placing third at the prestigious International Tchaikovsky Competition in Russia, held June 17-27, and Park University hosting a watch party on June 27 to view Broberg’s finals performance aired on KMBC-TV and KCUR-FM in Kansas City on June 27 and June 28. Roger Kugler, D.M.A., director of the ICM, was interviewed for the stories.

Ashley Jones, esports head coach and Vincent Payne, esports student-athlete, were interviewed by KMBC-TV in Kansas City for a story that aired on June 28 related to the Esports Summer Combine the University’s Parkville Campus hosted on June 28-29.

Sarah Moe Meyers, a new member of Park University’s Board of Trustees, was quoted in a Kansas City Business Journal article on July 1, provided comments related to U.S.-China trade talks. Moe is the federal affairs director at Hallmark.

Matt Harris, Ph.D., assistant professor of political science, was interviewed for a story on the meaning of patriotism that aired on WDAF-TV in Kansas City on July 4.

Note: To view a comprehensive schedule for all events, including athletics and student life, visit park.edu/calendars/park-events-calendar.html.