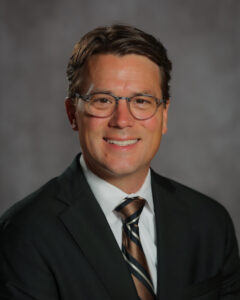 Shane B. Smeed was appointed president effective January 2022, having been interim president since December 2020. Before his recent appointment, Smeed served as Park’s vice president and chief operating officer. In that role, Smeed provided strategic and tactical leadership to more than half of the University’s staff in the areas of enrollment management, student success, financial aid services, marketing, student engagement, athletics and campus center operations. In addition, he was responsible for approximately 16,000 students annually, including 10,000 active duty, National Guard, reserve, veteran and military family member students.

The son of a university administrator, Smeed always knew he wanted to work in higher education. Smeed came to Park University in 2015, attracted by the diversity of its student body and its Kansas City metropolitan area location. When he first stepped foot on the picturesque flagship Parkville (Mo.) Campus, he stood next to historic Mackay Hall and looked over the campus and the city. Instantly, he knew Park would become his professional home.

Smeed maintains a strong commitment to a “Park United” and leading a University that celebrates diversity, serves a growing student body and earns recognition from its faculty and staff as an employer of choice. Smeed believes that Park’s motto, Fides et Labor (Latin for faith and work), can inspire students, faculty and staff to achieve all their goals.

Smeed has more than 20 years of progressive experience in higher education. Smeed earned a Master of Arts degree in Higher Education and Student Affairs Administration from Saint Louis University and a Master of Business degree from Keller Graduate School of Management.

Smeed has played a volunteer leadership role with several Kansas City area organizations. He currently serves on the board of directors of the Kansas City Area Development Council and the Command and General Staff College Foundation. He previously served as an appointed planning and zoning commissioner for the City of Parkville. Smeed and his wife, Angela, have three children: Samantha, 20, Andrew, 18, and Landon, 14.