•  Katie Ervin, Ed.D., changed roles, becoming the associate vice president of strategic alliances after having served as associate vice president of academic operations for the previous two years. Ervin’s new position will lead the expansion of Park’s network of academic and employer relationships and noncredit enrollments. She will continue to oversee the Office of Professional Education and Workforce Development, and has added the Office of Career Development (formerly under the Office of University Engagement) and Park’s Access to Education programs. 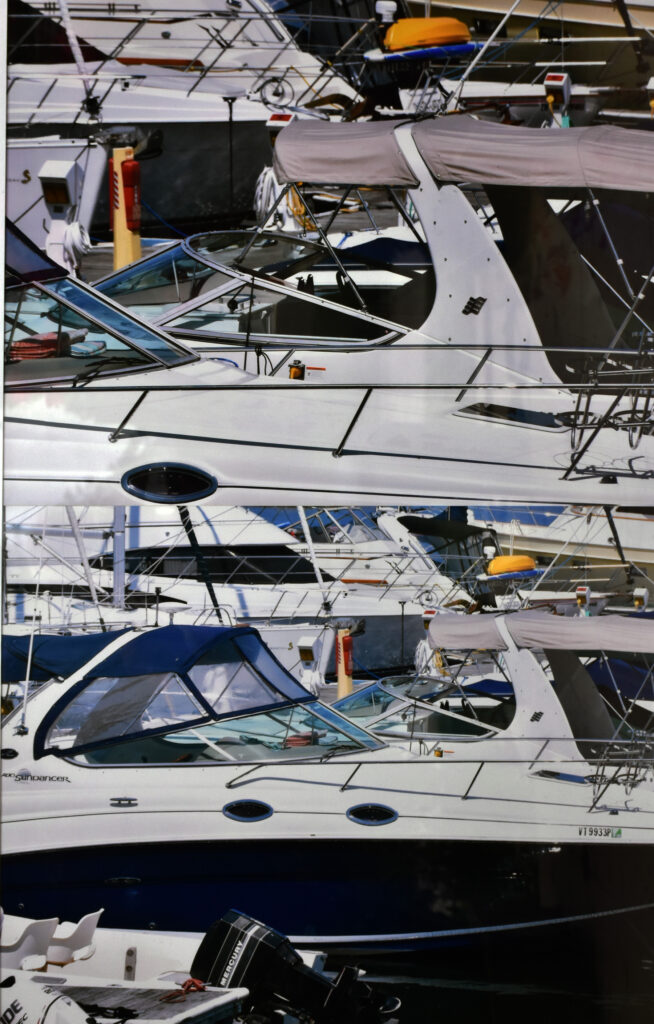 Adjunct Faculty Member to Have Art on Display in Campanella Gallery

An art exhibit featuring the works of William Eickhorst, Ed.D., adjunct instructor of fine art, will be on display in Park University’s Campanella Gallery (located within Norrington Center on the Parkville Campus) from Monday, March 8, through Friday, April 23. In his artist’s statement, Eickhorst said, “Many artists, but not all, spend their creative lives in the development of a particular ‘style’ — the visual characteristics that make their work immediately recognizable to audiences. I personally find such a pursuit to be both boring and tedious. I would much rather that people wander around a gallery space looking at my work and thinking that they are viewing a juried exhibition or a group show — only to discover that everything in the show is by the same artist. I am much more interested in exploring the possibilities of different materials and how those materials can be used to fabricate images. As such, I tend to work in series, exploring different approaches to the materials without regard as to whether or not the images relate to each other.”

Park University’s Board of Trustees approved promotion and/or tenure for the following faculty during its virtual meeting on Feb. 12, effective with the start of the 2021-22 academic year:

Rob Jones, adjunct instructor of finance, was highlighted in the February edition of “The Student Scoop,” an Association for Financial Counseling and Planning Education newsletter. In addition, the blurb included news that Park’s undergraduate personal financial planning program has been approved as an AFCPE Registered Education Program.

Members of Park University’s Parkville Campus men’s basketball team were recognized by the Heart of America Athletic Conference. Seniors G Rodrigue Marthone and G/F Cory Reeves earned All-Conference first team honors. Marthone was also selected the conference Newcomer of the Year. In addition, senior F Earnest Myles III was selected conference Defensive Player of the Year. Marthone averaged 19.1 points per game during the regular season, while Reeves averaged 15.8 points per game. Myles led the conference and ranked 6th in the nation with 11.7 rebounds per game. Read more about the honors at parkathletics.com/article/3317.

An article authored by Samantha Quinn, Ph.D., assistant professor of communication, “Gossip Via Text Message: Motivation for Using Text Messaging to Share Gossip,” was published in the recent edition of the Iowa Journal of Communication.

A story about Park University’s Valor Medals Review project, headed by staff and students in the George S. Robb Centre for the Study of the Great War, appeared on the KC PBS (KCPT) / Flatland website on Feb. 3. The story also includes a 4½-minute video that will air occasionally on KC PBS in-between programs. Tim Westcott, Ph.D., associate professor of history, associate university archivist and director of the Robb Centre, Ashlyn Weber, associate director of the Robb Centre, and Joshua Weston, senior military analyst and junior European history major, provided comments for the story.

Christopher Boros, ’11, and his spouse, Laurie, were featured in a story that appeared on the Defense Visual Information Distribution Service website on Feb. 3. The couple was highlighted for both earning master’s degrees paid through the Post-9/11 GI Bill (Chapter 33). Boros is a global heavyweight service program manager in the U.S. Transportation Command’s Strategic Plans, Policy and Logistics directorate.

Terry Lovelace, ’79, was interviewed on “Into the Parabnormal,” a nationally syndicated radio program, in mid-February, discussing “candid memories from a lifetime of experiences with ET’s and tales of encounters with the unknown.”

Roland Alforque, a junior criminal justice administration/security major at Park University’s Hill Air Force Base (Utah) Campus, was highlighted in an article that appeared on the Air Education and Training Command’s website on Feb. 16. According to the article, Alforque is the first Air Force civilian to use the new Civilian College of the Air Force program where civilian workers get applied college credit for completing required military training.

Alex Silvius, Ph.D., associate professor of physics, was interviewed for a story that aired on KCTV in Kansas City on Feb. 16. The story focused on how energy grids work in light of the rolling controlled power outages across the region due to the extreme cold weather.

Edna Martinson, ’12, was named in February to Forbes magazine’s first class of the “Next 1000,” an initiative that showcases entrepreneurial heroes across the country. Martinson and her husband, Clarence Tan, founded Boddle Learning a game-based learning platform, in 2018 to combat educational gaps and help improve student outcomes in elementary schools.

A story featuring an interview with Randy Krehbiel, keynote speaker for Park University’s Spencer Cave Black History Month Lecture, appeared in the Platte County (Mo.) Citizen on Feb. 20 in advance of the lecture held on Feb. 22.

Carneysha Mendoza, ’16, a U.S. Capitol Police captain, testified on Feb. 23 in front of the U.S. Senate Rules and Administration Committee and the Homeland Security and Governmental Affairs Committee as part of a joint oversight hearing on security failures during the January 6 attack on the U.S. Capitol. She was on the frontlines of the attack. Her testimony appeared on C-SPAN, CNN, MSNBC and other news outlets across the country. In addition, The Kansas City Star published a story on Mendoza’s speech.

Crystal Young-Haskins, ‘07, M.E. ’11, was honored on Feb. 27 with a Legend Among Us Award as part of the sixth annual Arkansas Heritage Celebration of Black History Month. A story featuring Young-Haskins appeared on the ArkansasOnline.com website on Feb. 25. Young-Haskins became the first African American female in the Little Rock (Ark.) Police Department’s history to hold the rank of assistant chief of police and has made strides to champion women in law enforcement throughout the state.

Sophia Pretrick, ’94, was one of 12 people honored by U.S. Secretary of State Anthony Blinken on Feb. 23 with a new International Anticorruption Champions Award, recognizing individuals who have worked tirelessly, often in the face of adversity, to defend transparency, combat corruption and ensure accountability in their own countries. Pretrick, an investigative advisor in the compliance investigation division in the Office of the Pohnpei State Public Auditor, raised the profile of anticorruption activities in the Federated States of Micronesia through her unique blend of government intervention and grassroots advocacy. She developed and launched multiple fraud awareness programs, including teaming up with NGO Youth-4-Change to reach thousands of youth on playing a role in fighting corruption.

Daryl Forte, ’90 (and 2014 Distinguished Alumnus Award recipient), was featured in a Black History Month story that aired on WDAF-TV in Kansas City on Feb. 26. Forte currently serves as the Jackson County (Mo.) sheriff.