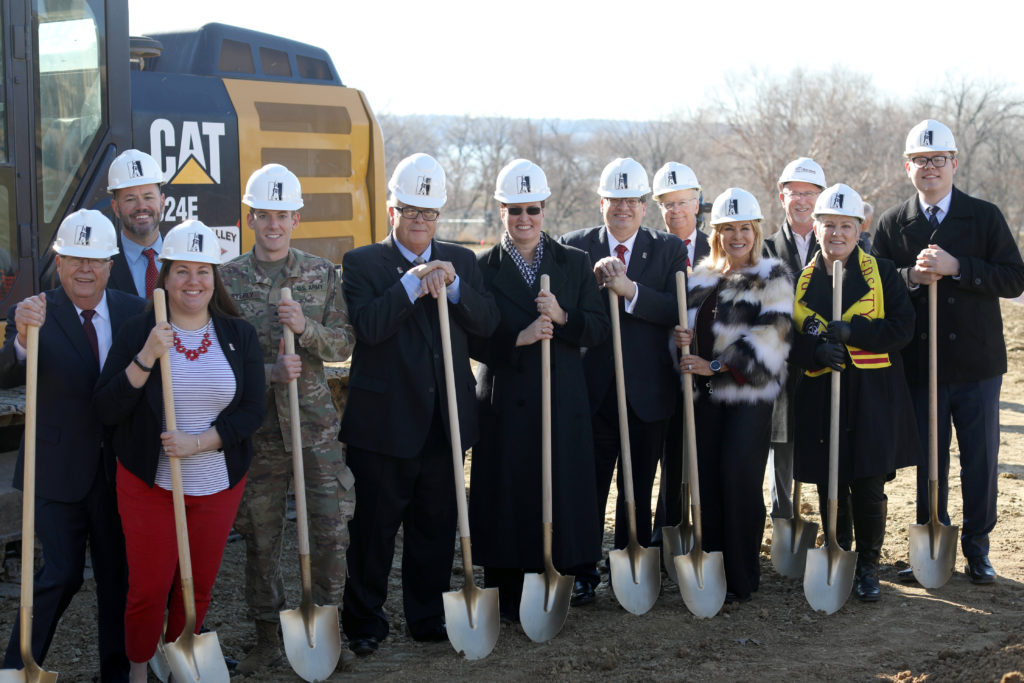 On Dec. 6, Park University students, faculty, staff, alumni and members of the community were a part of a groundbreaking ceremony for the Robert W. Plaster Free Enterprise Center on the Parkville Campus. When completed, the approximate 20,500 square-foot building will house Park’s School of Business and the Park Global Warrior Center. The Plaster Center will include classroom and office space, a state-of-the-art finance lab, an innovation and entrepreneurship lab, video production studio and lounge for commuter students. 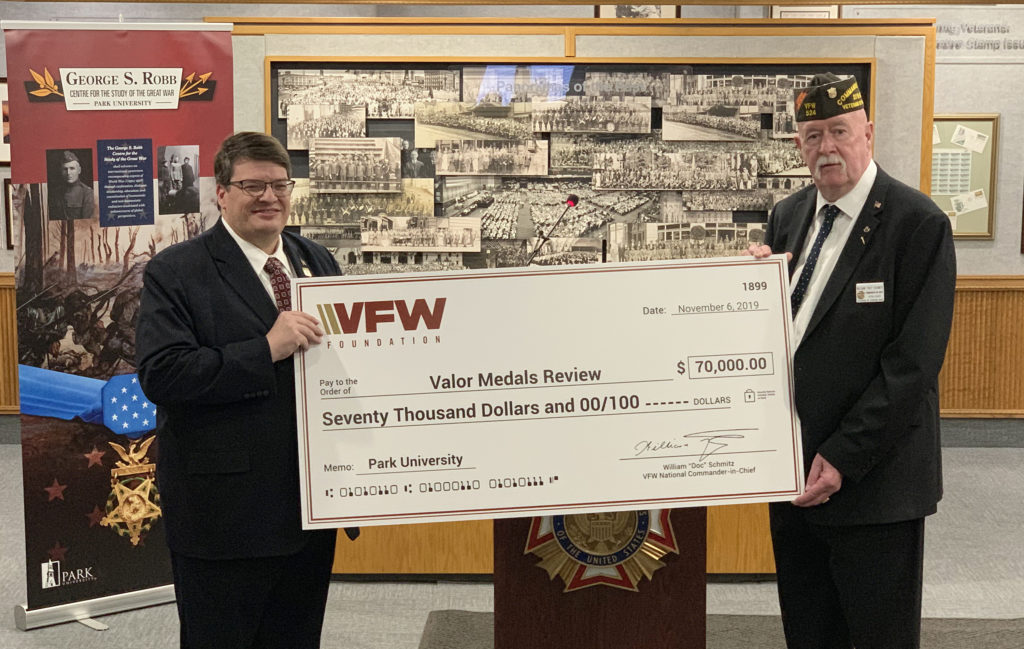 Veterans of Foreign Wars National Commander William “Doc” Schmitz presented a $70,000 donation to Park University on Nov. 6 in support of the University’s research initiative into the awarding or denying of World War I military service medals based on possible racial bias. The project is being conducted by Park University’s George S. Robb Centre for the Study of the Great War, the Valor Medals Review Task Force, and in conjunction with the Foundation for the Commemoration of the World Wars on behalf of the U.S. World War I Centennial Commission.

Park University pushed for legislation — included in the National Defense Authorization Act — which would require the Department of Defense to execute a systematic review of the valor medals awarded to African American service members, and those of other minority groups who were potentially denied medals due to racial bias. 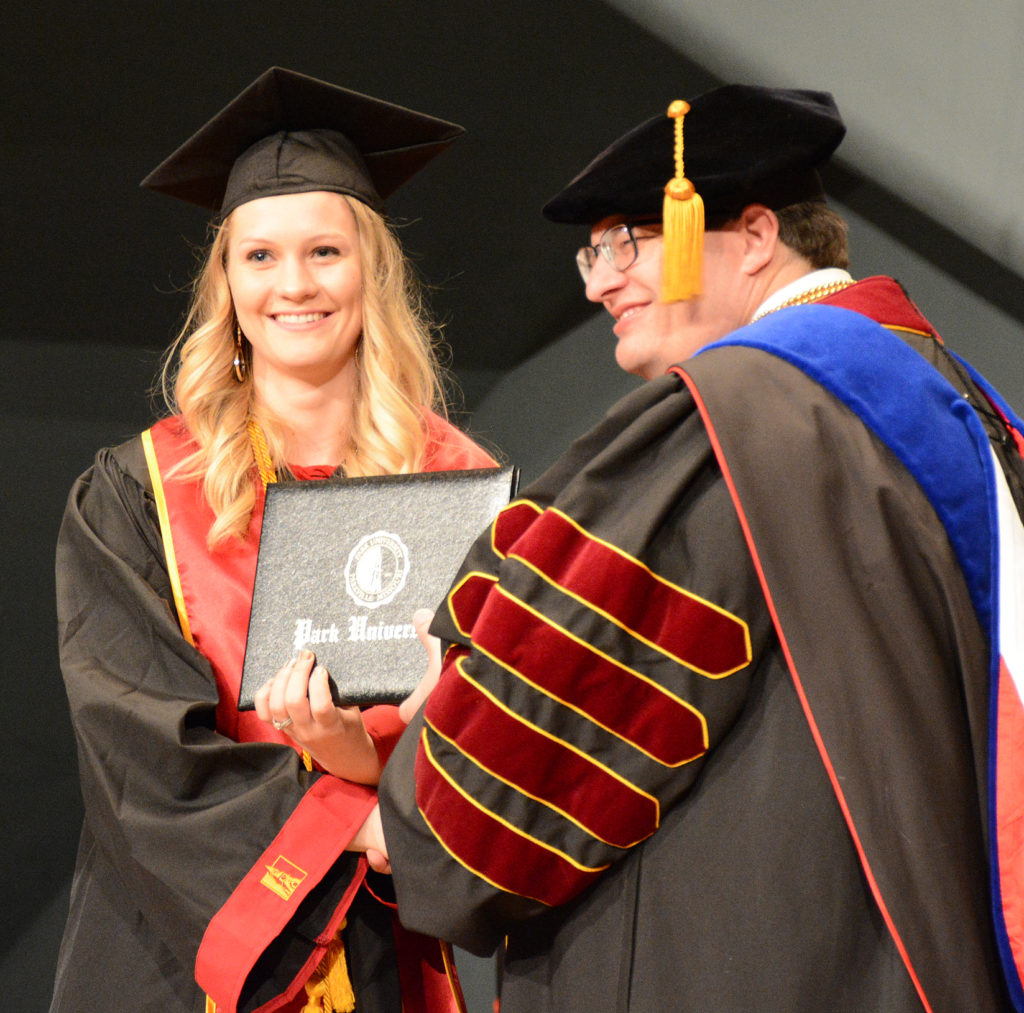 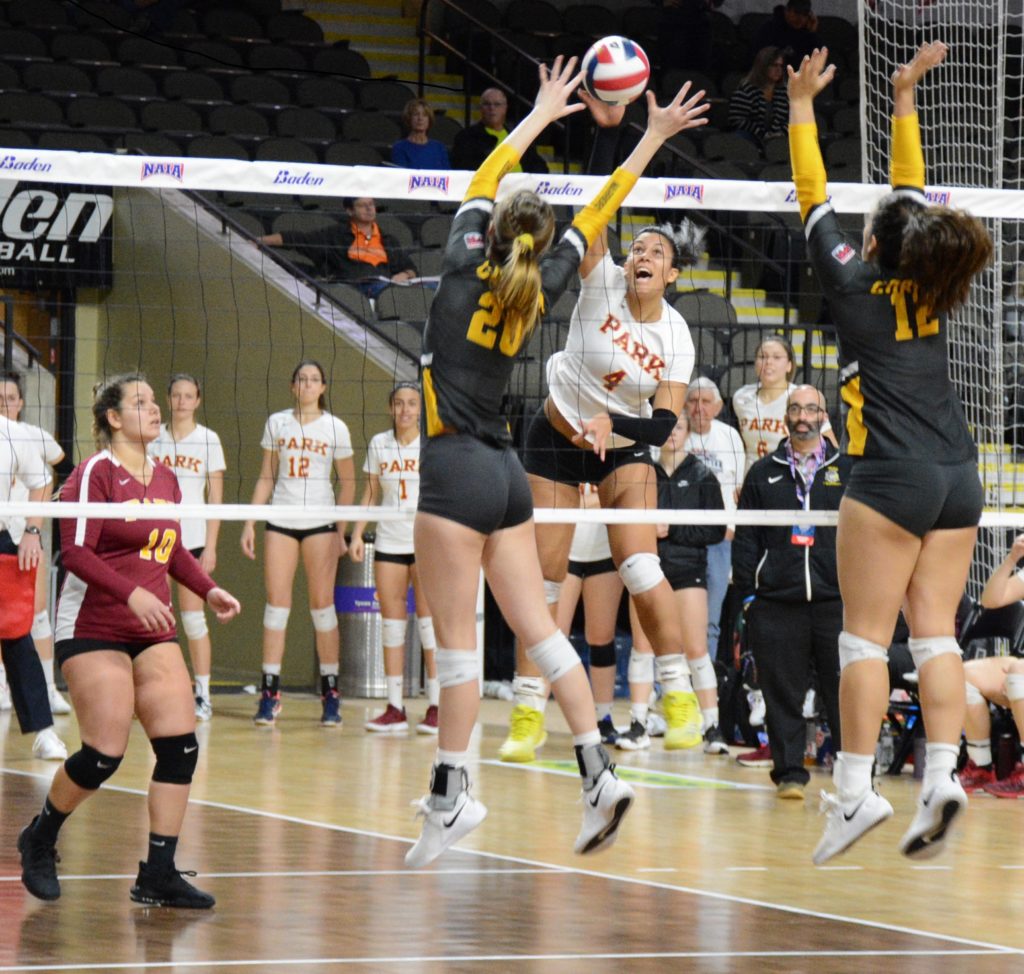 The Park University Parkville Campus women’s volleyball program entered the 2019 NAIA national tournament the same way it left the 2018 tournament – as the number one team in the country. The Pirates cruised through the pool play portion of the tournament winning all three of their matches to advance to the single-elimination bracket. Park came out strong with a three-set victory over Corban (Ore.), but the Pirates season came to an end in the national quarterfinals with a five-set loss to Westmont (Calif.). Park finished the year with a 32-4 record.

Park University’s athletic programs at the Parkville Campus have been approved for membership into the Heart of America Athletic Conference. Park will immediately join the conference to participate in administrative matters and strategic planning with athletic programs beginning participation at the start of the 2020-21 academic year. Park, the 14th member of the HOA, has been a member of the American Midwest Conference since 2009.

Jeff Fore Appointed as Director of Athletics at Gilbert Campus 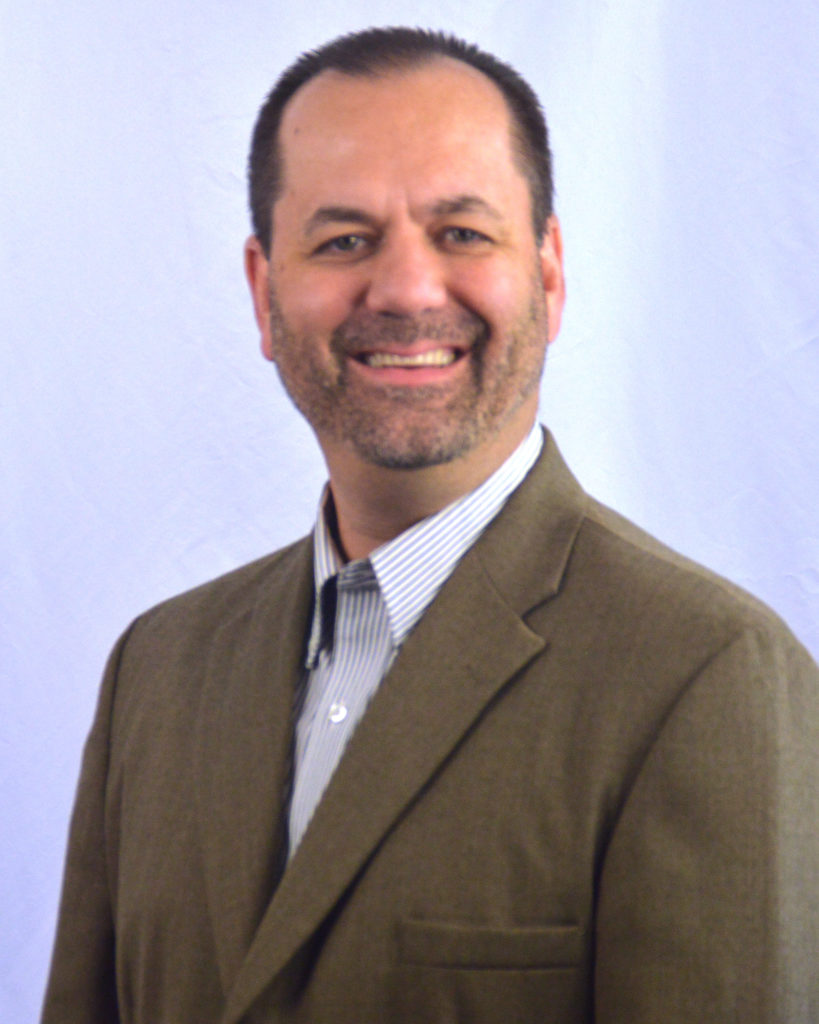 Park University has appointed Jeff Fore as director of athletics at the University’s Gilbert, Ariz., campus. Fore, who also serves as the Park–Gilbert women’s basketball head coach, began his additional duties on Nov. 4. In his role as athletics director, Fore will oversee all 11 of Park–Gilbert’s athletic programs, and will ensure that coaches and staff work together in the development of quality student-athletes, fostering institutional values for image building and campus spirit.

Fore was appointed the first head coach of the Park–Gilbert women’s basketball program in September 2018 after spending the previous three years as director of team recruiting solutions and senior recruiting specialist at Next College Student Athlete. He has also served in athletics administration at Grand Canyon University (2013-15) and Mesa Community College (2008-10) as assistant athletic director and director of athletics, respectively. Read more about Fore at park.edu/news/fore-appointed-gilbert-athletics-director.

An art exhibit highlighting the work of two Park University seniors is on display through Tuesday, Dec. 31, in the Campanella Gallery. Admission to the Gallery, located within Norrington Center on the University’s Parkville Campus, is free. The exhibit features the work of the following students:
•  Conner Lee, senior fine art major, displaying ceramic vessels with the theme of war
•  Kristina Rackin, senior fine art major, displaying acrylic portrait paintings

The heart and soul of Park University lies within the spirit of the people who represent the institution in the classroom and community. The Office of University Engagement’s “Park Stories” initiative showcases fun and inspiring features highlighting Park University students, faculty, staff and alumni. These stories are shared periodically in The Crow’s Nest. This edition’s installment highlights Jocelyn Clayton, senior English and secondary education major.

Sarah Zitter, senior political science major, was one of 25 college students across the country to receive a scholarship to attend the World Affairs Councils of America’s national conference in Washington, D.C., Nov. 6-8. Zitter had the opportunity to meet foreign ambassadors and participated in panels on global economic trends.

Simon Karakulidi, senior music/piano performance major, was selected as the gold medalist of the 2019 Wideman International Piano Competition in Shreveport, La., on Dec. 8. Karakulidi won a $5,000 cash prize, a website design, and orchestral engagements with the Shreveport Symphony and other orchestras throughout the U.S. He was also awarded third prize at the Olga Kern International Piano Competition in Albuquerque, N.M., held Oct. 27-Nov. 3.

Scott McRuer, immediate past chair of Park University’s Board of Trustees and current board member, was honored with the Missouri Society of Certified Public Accountant’s Outstanding Public Service Award during an awards event on Nov. 7 in Kansas City, Mo.

Shawntae Baldwin, senior management/healthcare major, was recognized by the Kansas City Chapter of the National Congress of Black Women on Nov. 9 with a $500 Non-Traditional Education Scholarship during the organization’s annual Awards and Scholarships Black Tie Gala.

Dmitry Gimon, Ph.D., assistant professor and program director, Master of Science in Information Systems and Business Analytics, co-authored an article that was published in the November issue of the EURO Journal on Decision Processes. The article, “A Refined Utility Function for Modeling ‘Me’ vs. ‘Us’ Allocation in a Sequential Group Decision Process,” proposes using the Cobb–Douglas utility function to refine standard utility functions as a weighted product of the player’s utility (“me” factor) and the jointly utility of players (“us” factor).

An article co-presented by Alla Adams, Ph.D., assistant professor, Master of Healthcare Administration program, was recognized by the Accreditation Council for Business Schools and Programs as a Best of Region honoree at the ACBSP Region 5 Fall Conference, Nov. 6-8 in Omaha, Neb. The article, “Overcoming Skill Gaps Using Conferencing Technology in the Virtual Classroom,” is now eligible to be presented at the national ACBSP conference in Summer 2020. In addition, Adams participated in a roundtable on “How Proactive Population Health Management and Better Care Coordination Improve Outcomes” and presented “Care Coordination Models in the United States: Achievement, Challenges and Opportunities” at the Global Clinical and Care Coordination Forum, Nov. 11-12 in Hamburg, Germany.

Greg Moore, D.B.A., associate dean of graduate studies in business and Edward F. Lyle Chair in Finance, presented a session on investments and various options available, risk and diversification to employees of the Kansas City Chiefs on Dec. 9 as part of Park University’s higher education partnership with the club.

Jenna Scott, community relations manager for the Downtown Kansas City, Mo., Campus, was among the 37 honorees as part of the Big Brothers Big Sisters of Kansas City’s Most Wanted Auction on Dec. 14.

A book authored by Nicolas Koudou, Ph.D., professor of business administration, has been published. The book, Business Environment in Sub-Saharan Africa, is intended to assist any multinational companies or executives to swiftly understand the business environment in the sub-Saharan African region and avoid common mistakes. It also assists investors who are dreaming to familiarize themselves with the region’s business environment.

Matt Harris, Ph.D., assistant professor of political science, was interviewed by KSHB-TV in Kansas City for a story that aired on Nov. 4 related to the expected low turnout for area elections.

Ashley Jones, esports head coach, was interviewed for a story that aired on WDAF-TV in Kansas City on Nov. 7 related to an esports and tech festival held Nov. 8-10.

Park University’s George S. Robb Centre for the Study of the Great War and the University’s Valor Medals Review efforts were featured as part of a Veterans Day story that aired on Nov. 11 on KMBC-TV in Kansas City. Tim Westcott, Ph.D., director of the Robb Centre and associate professor of history, was interviewed for the story.

Haley West, ’12, authored an article on “4 Therapists Who Played Vital Roles in My Journey with Mental Illness” that appeared on the website The Mighty.com in November.

Vlatko Andonovski, ’08, who was appointed head coach of the U.S. Women’s National Soccer Team in late October, was featured in stories that aired on KCUR-FM in Kansas City on Nov. 13.

Carlos Villalobos, ’08, was highlighted in a feature story that aired on KFOX-TV in El Paso, Texas, on Nov. 12. Villalobos, began his journey as a janitor before earning his degree and eventually becoming a principal at Red Sands Elementary School in El Paso.

Park University and students in the American National Government (PO 200) class on the Parkville Campus were highlighted in a story that aired on WDAF-TV in Kansas City on Nov. 14. The story, which included soundbites from Matt Harris, Ph.D., assistant professor of political science, Nancy Cortez-Alfaro, freshman political science/international politics major, and Imara Harris, sophomore graphic design major, was related to students in the class learning about the impeachment process and hearings.

SuEllen Fried, ’75, was featured in a story that aired on WDAF-TV in Kansas City on Nov. 27 related to her transforming the lives of prisoners at the Lansing (Kan.) Correctional Facility via her “Reaching Out From Within” program.

ECCO Select, led by Jeanette Prenger, ’09, president and founder, and chair of Park University’s Board of Trustees, was ranked No. 6 on Ingram’s (a Kansas City business magazine) list of the top area minority-owned businesses, and No. 14 on Ingram’s list of top area women-owned businesses, both based on 2018 gross revenue, in the November issue.

John Hamilton, Ph.D., associate professor of criminal justice administration, was interviewed for a story that aired on KSHB-TV in Kansas City on Dec. 1. The story was a look at recommendations for the Kansas City, Mo., Police Department’s homicide unit.

A story about Edna Martinson, ’12, and the business she co-founded with her husband Clarence Tan, Boddle Learning, appeared on the Startland News website on Dec. 9. The couple recently won a $25,000 AT&T Aspire Audience Award at the AT&T Pitches with Purpose contest in San Francisco in December.

A review of a concert by Behzod Abduraimov, International Center for Music artist-in-residence, at Carnegie Hall on Dec. 10 appeared on the New York Classical Review website on Dec. 11.

Suzanne Tiemann, Ph.D., assistant professor of education and director of undergraduate programs, was interviewed for a story that aired on WDAF-TV in Kansas City on Dec. 17. The story was related to a proposal in Missouri to increase teacher pay and how any boost in pay might help with the recruitment and retention of educators in the state.

Casi Joy McCall, ’12 (who goes by the stage name Casi Joy), competed in WDAF-TV’s (Kansas City) version of “The Masked Singer” on Dec. 16, performing “Let It Go” as “The Reindeer.” After an online vote, Joy was revealed as the winner of the event on Dec. 18.