Board of Trustees Adds a Trio of New Members

The governing body of Park University — its Board of Trustees — elected three individuals to each serve a three-year term on the board, effective July 1. Elected were: Terry Calaway, Ed.D. (left), Scott Jackman (right) and Timothy Pachasa (below right). Read their profiles at park.edu/news/new-trustees-2022.

Park University International Center for Music graduate student Ilya Shmukler, who was one of 30 competitors participating in the 16th Van Cliburn International Piano Competition in Fort Worth, Texas, advanced to the finals (6 competitors) of the prestigious event, held June 2-18. Considered one of the renowned international music contests, the event included the world’s top 18- to 30-year-old pianists competing for cash prizes, comprehensive career management, artistic support and bolstered publicity efforts for three years. 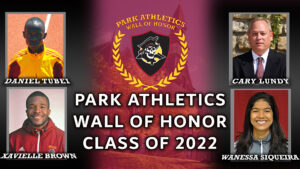 Park University Parkville (Mo.) Campus men’s volleyball player Luciano Bucci has been selected as a 2021-22 CoSIDA (College Sports Information Directors of America) Academic All-American for the third time in his career. This is the first time in school history that a Park student-athlete has been selected for three CoSIDA Academic All-American awards. To be eligible for the award, student-athletes must have a cumulative grade point average of at least 3.30, participate in at least 50 percent of the season’s total contests and have reached sophomore athletic eligibility. Bucci excelled in the classroom with a 3.95 grade point average as an undergraduate and he has a 4.0 GPA in his Master of Business Administration program. His 895 assists this past season ranked 13th in the NAIA and he ranked 11th nationally with 9.73 assists per set. While Bucci’s playing career ended at the NAIA national tournament in April, he will continue to play a role with the Pirates as he transitions into an assistant coach. 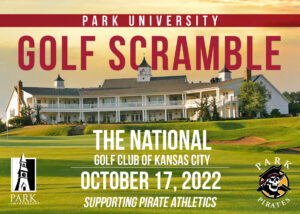 The 2022 Park University Golf Scramble, a four-person tournament that benefits the University’s Parkville (Mo.) Campus athletics programs, is scheduled for Monday, Oct. 17, at The National Golf Club of Kansas City. Golfers get on the course with a shotgun start at 10 a.m., with registration beginning at 8:30 a.m. Registration fees are $250 per golfer or $1,000 per four-person team, and a variety of sponsorship packages are available, ranging in price from $1,500 to $5,000. Entries include 18 holes of golf with a cart, box lunch on the course, driving range access prior to the event, on-course games and contests, refreshments and flight prizes. To register for the tournament or for more information, visit park.edu/golf. 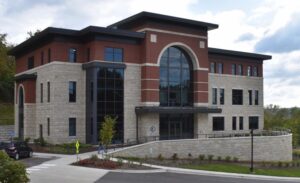 Straub Construction, the general contractor for the Robert W. Plaster Free Enterprise Center and School of Business, which was completed on Park University’s Parkville Campus in August 2021, won a 2022 Building Excellence Award from the Kansas City Chapter of the Associated General Contractors. It was selected as the Project of the Year for those costing between $5 to $10 million during an event on June 8.

Martha Linscott, head coach of Park University’s Parkville (Mo.) Campus men’s and women’s golf teams, has qualified for the U.S. Senior Women’s Amateur Championship, which will be held Thursday, July 30, through Monday, Aug. 4, at Anchorage (Alaska) Golf Course. Linscott advanced to the USSWAC by winning a qualifying tournament at Lake Quivira (Kan.) Country Club on June 14, shooting a four-over par 75 that topped the second place finisher by nine strokes. At the USSWAC, Linscott is guaranteed two stroke-play rounds. The top 64 players will advance to a single-elimination match play tournament. This isn’t Linscott’s first trip to the USSWAC. Last year, at The Lakewood Club in Alabama, Linscott ended stroke play in a tie for 19th place before losing 3&2 in the opening round of match play.

Lora Cohn, Ph.D. (left), associate professor of communication arts, and Amy Mecklenburg-Faenger (right), Ph.D., associate professor of English, co-presented a paper at the Rhetoric Society of America conference on May 29 in Baltimore. The paper, “Narrative as Rhetorical Strategy in Caroline Nichols Churchill’s Newspaper The Colorado Antelope (1879-82),” examined the narrative strategies Churchill used to indirectly argue for suffrage within the serialized travel stories she published in her paper.

Leslie Jensby (left), assistant professor of social work and director of the Bachelor of Social Work program, and Nikki Pauls DiSimone (right),  assistant professor of social work, presented a session on “Ethical Considerations for Community Health Workers in a Post-COVID World” on May 17 at the Missouri Department of Health and Senior Services Community Health Workers summit in Kansas City, Mo. The presentation focused on ethical issues of documentation and professional boundaries, and ways to prepare for continuing best practice in human service provision.

Park University faculty and students were among the presenters for sessions at the Accreditation Council for Business Schools and Programs Conference, June 17-20 in Washington, D.C. Alla Adams, Ph.D. (left), assistant professor and program director of healthcare administration, and Marcus Elendu, graduate student in the Master of Science in information systems and business analytics program, co-presented a session on “Using Peregrine Data to Evaluate the Effectiveness of Curriculum Changes and Program Assessment.” Susan Keim, Ph.D. (right), assistant professor of public administration, presented a session on “What Increases Acceptance of Online Learning Among College Students?”

Nathalie Brech, director of Park University’s Lenexa (Kan.) Campus, and Ben Zibers (right), associate vice president of the Gilbert (Ariz.) Campus, were among the participants who recently graduated from this year’s cohort of the Lenexa Chamber of Commerce’s Leadership Lenexa program and the Gilbert Chamber Foundation’s Gilbert Leadership program, respectively.

Shmukler was also interviewed for a story previewing the competition that aired on KDFW-TV in Dallas-Fort Worth on June 1.

In addition, KCUR-FM in Kansas City (the parent station to KWJC-FM), published a story on Shmukler on June 13, the day after he was selected as one of six finalists in the Cliburn event.

Following the competition, Shmukler was featured in an article that was posted on The Kansas City Star’s website on June 20 and published in the print edition of the paper on June 26.

An article authored by Matt Harris, Ph.D., assistant professor of political science, was published in The Conversation, a nonprofit, independent news organization dedicated to unlocking the knowledge of experts for the public good, on June 8. The article is titled “Primaries are getting more crowded with candidates, and that’s good news for extremists and bad news for voters.”

Harris was interviewed for a story posted to the WDAF-TV (Kansas City) website on June 15 related to the Northwest Missouri State University Board of Regents not renewing the contract for its president. Harris’ comments were related to the political make-up of board appointees for public schools in the state.

Harris was also interviewed for stories that aired on KMBZ-FM in Kansas City on June 27 related to the U.S. Supreme Court’s decision to overturn Roe v. Wade and how the decision affects those in Missouri and Kansas.

In addition, Harris was interviewed for stories that aired on WDAF-TV on June 28 related to the Missouri Senate race.

Park University was featured throughout the June 11 issue of The Independent, Kansas City’s journal of society. Photos from the International Center for Music’s Stanislav and Friends event in March appeared in the center spread; President Shane Smeed’s inauguration in April was highlighted in a half-page spread; and the Park ICM was featured in a story focusing on winners of international music competitions.

John Hamilton, Ph.D., associate professor of criminal justice administration, was interviewed for stories that aired on KMBZ-FM in Kansas City on June 14, discussing the correlation between rising temperatures and rising crime rates.

Mallory Jansen, ’13, and the business she co-founded, was highlighted on the KCUR-FM (Kansas City) website on June 20. Jansen co-founded Flexy, a company that pairs fitness trainers and yoga instructors in apartment complex gyms.