The most prestigious honor bestowed on any student at Park University — the Outstanding Parkite Award — went to seniors Jocelyn Clayton (left) and Rinku Gopali (right). The Outstanding Parkite Award is given to two students on the University’s Parkville Campus who best exemplify the ideals of the University in their character, conduct, scholarship and student activity participation. Read more about the awards presented during the Honors Convocation at park.edu/news/honors-convocation-2021.

In celebration of the leadership achievements of Park University students, faculty and staff during the 2020-21 academic year, the Office of Student Life and the Park Student Government Association announced recipients of honors as part of the 26th annual Dr. Doris A. Howell Leadership Awards. The awards program, held virtually on April 14, is named for Howell, a 1944 Park graduate who was an internationally renowned leader in pediatrics and hospice care before passing away in November 2018. Read about the awards presented at park.edu/news/howell-awards-2021.

Park University has appointed Jeff Hurley as director of campus safety. Hurley began his duties at Park on April 19. In his role as director of campus safety. Hurley oversees a staff of 10 campus safety officers on the University’s Parkville Campus. Along with ensuring a safe and secure working and learning environment for Park employees and students, Hurley is responsible for the development, implementation and improvement of the University’s security, emergency management, environmental health and parking programs.

Hurley served Kansas City, Mo., as a police officer from 1988-2013, holding a variety of roles with various patrol divisions across the city before retiring with the rank of sergeant. Before joining Park University, Hurley served as a park ranger supervisor for the Kansas City, Mo., Department of Parks and Recreation since July 2018. Read more about Hurley at park.edu/news/hurley-appointed-campus-safety-director.

The Park University Parkville Campus women’s golf team qualified for the NAIA National Championships in dramatic fashion on April 27. After two days and three rounds of golf in the Heart of America Athletic Conference Championship, the Pirates and Mount Mercy University (Iowa) were tied with team scores of 1,043 to force a playoff. Five players from each school teed off on the 18th hole at Creekmoor Golf Club in Raymore, Mo. Park’s players totaled one stroke better than the Mustangs to grab the first place trophy and secure a spot in the national tournament, to be played at Rose Creek Golf Course in Oklahoma City, May 25-28. It is the first time since 2008 that Park’s women’s golf team has qualified for the national tournament. 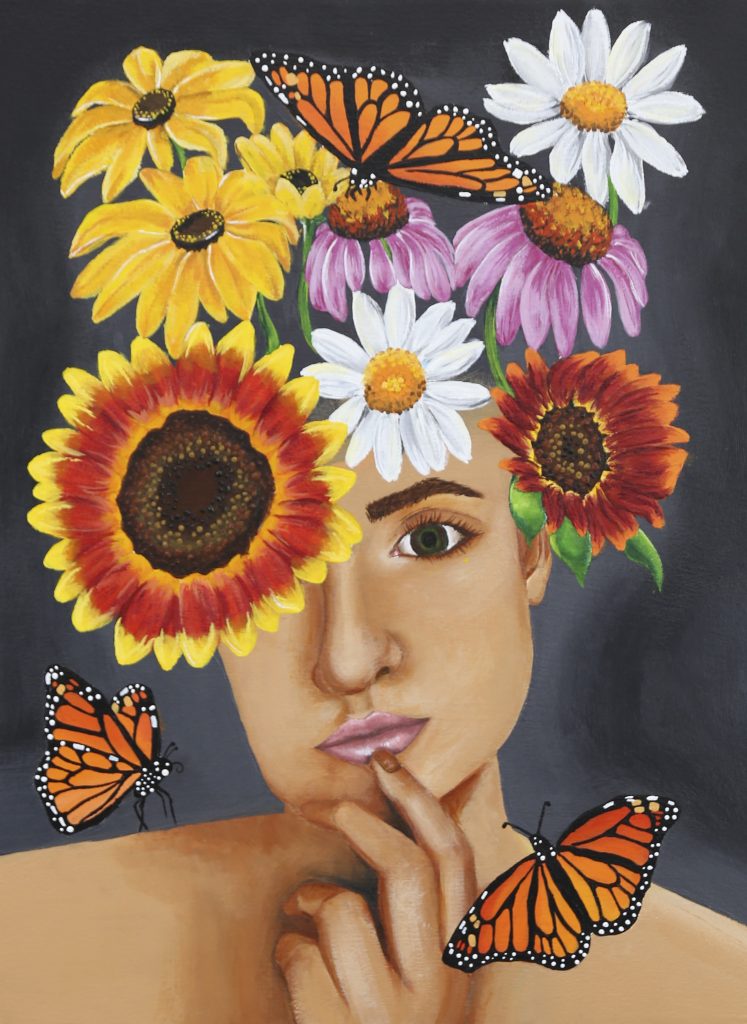 Sophia Gunther, senior biology major, received the first prize for a presentation by an undergraduate student at the Kansas Academy of Science’s annual meeting, held virtually on April 10. Gunther presented a research project titled “Preliminary Analysis of the Dental Ultrastructure of the Stingray Dasyatis from the Pungo River Formation (Miocene) of North Carolina.” She was assisted on the research by Brian Hoffman, Ph.D., professor of biology. Also as part of the conference, Hoffman and Scott Hageman, associate professor of geology and associate dean of the College of Liberal Arts and Sciences, presented a paper titled “Comparison of Cutting Edges of the Fossil Sharks Squalicorax Curvatus, Galeocerdo Aduncus and Physogaleus Contortus.”

Andrew Davis, senior director of enrollment and student success, was honored by the Northland (Kansas City, Mo., area) Regional Chamber of Commerce on April 27 with an Excellence in Higher Education Award.

Samantha Quinn, Ph.D., assistant professor of communication, was a panelist for an American Public Square virtual event on “Student Loan Debt: Where do We Go from Here?” on April 8.

Roger Dusing, Ph.D., chief human resources officer, presented a workshop on “The Art of Separation: A Guide to One of the Hardest of HR’s Tasks” at the College and University Professional Association for Human Resources Virtual Spring Conference on April 12. The session focused on how to conduct involuntary employee terminations and minimize the risks to the institution by treating everyone with dignity and respect. Dusing also presented a similar session for the Missouri Chapter of CUPA-HR on April 27.

Erik Bergrud, chief strategic communications officer, was selected by the National Academy of Public Administration to participate in two discreet, one-year panel studies focusing on the U.S. Coast Guard Academy. The first is a study to enhance the cultural competency of the USCGA; the second focus on USCGA admission processes, building on what was learned in the first study. Bergrud was elected as a NAPA Fellow in 2013.

Tim Westcott, Ph.D., associate professor of history, associate archivist and director of the George S. Robb Centre for the Study of the Great War, authored a biography on William Rockhill Nelson (1841-1915), the co-founder of The Kansas City Star, that was published on the Missouri Encyclopedia (a project of the State Historical Society of Missouri and launched in conjunction with the Missouri 2021 Bicentennial) website in April.

Five Park University students from across the country have been each awarded a $1,000 Goodness for Ethical Leadership Scholarship from RecognizeGood in Austin, Texas. The scholarships were awarded to: Ana Aldrete, senior management major; Robert Dake, senior management major; Adriana Rosas, sophomore management/healthcare major; Roschel Schmigotzki, junior management/marketing major; and Christine Williams, sophomore management/computer information systems major. RecognizeGood is a nonprofit organization that provides the means for anyone to illuminate, connect with and learn from great examples of goodness.

Casi Joy McCall, ’12 (who goes by the stage name Casi Joy), was highlighted in a “Five Things You Don’t Know About Me” feature that appeared on the In Kansas City magazine website on April 5. She was also featured on the Women of Country Music website on April 11.

Stories about Bronson Schaake, ’12, ’14 MBA, being appointed the boys basketball head coach at Joplin (Mo.) High School appeared in the Joplin Globe and on the KSNT-TV (Joplin/Pittsburg, Kan.) website on April 9.

Lucas Sousa, Parkville Campus women’s soccer assistant coach, was selected as the Major Arena Soccer League Rookie of the Year for the 2021 season. A member of the Kansas City Comets, Sousa finished second on the team with 17 points, scoring nine goals and providing eight assists.

Tim Westcott, Ph.D., associate professor of history, associate archivist and director of the George S. Robb Centre for the Study of the Great War, participated in a 20-minute interview for a recent VFW Podcast (begins at 35:08) where he discussed the Valor Medals Review program, described the process the Robb Centre staff uses to review those who may have been denied the Medal of Honor due to racial bias and how a 2019 VFW donation of $70,000 toward the VMR was used.

The Park University Parkville Campus women’s volleyball team was highlighted in a story featured on the WDAF-TV (Kansas City) website on April 13 in advance of the Pirates opening round match in the NAIA national tournament. Mike Talamantes, head coach, and players Alissa Flint and Noura Meawad were interviewed for the story.

John Hamilton, Ph.D., chair and associate professor of criminal justice administration, was interviewed for a story that aired on WDAF-TV in Kansas City on April 13 related to the shooting of Daunte Wright in Minnesota where a police officer mistook her taser for a gun.

Hamilton was also interviewed for a story that aired on WDAF-TV on April 21 related to activists pushing for more police reform following the Derek Chauvin verdict.

The next day, Hamilton was interviewed for a story that aired on KSHB-TV in Kansas City related to an update on body cameras for the Kansas City, Mo., Police Department.

Vince Clark, vice chair of Park University’s Board of Trustees, is leading a new Kansas City area nonprofit organization, Pathway Financial Education, that will address an unmet need for comprehensive financial education and training in under-resourced communities. Clark is the vice president of business development and chief corporate affairs officer at Creative Planning, based in Overland Park, Kan.

Aubrey Sullivan, a senior at Leavenworth (Kan.) High School was announced as the winner of a $3,500 scholarship by the Command and General Staff College Foundation to attend Park in Fall 2021. A brief story about Sullivan appeared on the CGSCF website on April 15.

Bob Kendrick, ’85, president of the Negro Leagues Baseball Museum in Kansas City, Mo., participated in a nearly 70-minute interview for the WFXR-TV (Roanoke, Va.) Sports Sitdown that was posted on April 16.

Ashley Jones, esports head coach, was interviewed recently for the College Esports QuickTake program on Spreaker.com. She discussed inclusion in esports and why Missouri has a number of varsity college esports programs in the state.

A backhanded reverse kill by Park University Parkville Campus men’s volleyball player Felipe Guirau in the Pirates’ pool play match against Georgetown (Ky.) College on April 21 was featured on ESPN’s SportsNation on April 22 as its No. 1 play of the day. Kansas City television stations KMBC-TV, KSHB-TV and WDAF-TV also aired the highlight.

Demetria Byers, a junior criminal justice administration/homeland security and law enforcement major, was interviewed for a story that aired on KMBC-TV in Kansas City on April 23 related to a push to educate college students on getting the COVID-19 vaccine.

GradDegree.com ranked Park University No. 1 on its “2021 Best Value Business, Management and Marketing Schools in the Plains States Region” list.