The Center for Global Peace Journalism works with journalists, academics, and students worldwide to improve reporting about conflicts, social unrest, reconciliation, solutions, and peace. Through its courses, workshops, lectures, magazine (The Peace Journalist), blog, and other resources, the Center encourages media to reject sensational and inflammatory reporting, and produce counter-narratives that offer a more nuanced view of those who are marginalized—ethnic/racial/religious minorities, women, youth, and migrants.

What is Peace Journalism?

Peace Journalism is when editors and reporters make choices that improve the prospects for peace. These choices, including how to frame stories and carefully choosing which words are used, create an atmosphere conducive to peace and supportive of peace initiatives and peacemakers, without compromising the basic principles of good journalism. (Adapted from Lynch/McGoldrick, Peace Journalism). Peace Journalism gives peacemakers a voice while making peace initiatives and non-violent solutions more visible and viable.

The Peace Journalist is a semi-annual publication of the Center for Global Peace Journalism at Park University in Parkville, Missouri. The Peace Journalist is dedicated to disseminating news and information for and about teachers, students, and practitioners of peace and conflict sensitive journalism.Submissions are welcome from all. We are seeking shorter submissions (300-500 words) detailing peace journalism projects, classes, proposals, etc. We also welcome longer submissions (800-1200 words) about peace or conflict sensitive journalism projects or programs, as well as academic works from the field.

Peace Journalism: An Introduction–Addis Ababa and Jimma, Ethiopia, July 2017. As a U.S. State Department Speaker and Specialist, Prof. Youngblood made presentations at two universities and in several public forums.

Peace Journalism and Health Reporting-Freetown, Sierra Leone, November 2016. Meeting with 30 journalists, the center’s director discussed the basics of peace journalism and their own reporting on the Ebola crisis.

Reporting Syrian Refugees—Building Communities of Understanding—Adana, Malatya, and Istanbul, Turkey. January 2015, May 2015, and November, 2015. Youngblood conceived, coordinated, and taught peace journalism seminars for Turkish students and professional journalists about how to responsibly report about refugees. The project was sponsored by the US Consulate-Istanbul and the US State Department.

The center’s director traveled to Kashmir to work on a peace journalism project with professional journalists and with students and faculty at the Islamic University of Science and Technology in Awantipora. See the Peace Journalism Insights blog for more information.

Working on a State Dept grant, the center presented seminars in Adana, Turkey and a summit in Istanbul, Turkey designed to improve reporting about Syrian refugees in Turkey. See the Peace Journalist magazine for more details. The project will continue in Malatya, Turkey in October.

The center’s director traveled to Rongo University (Kenya) to conduct seminars and workshops with a peace theme. Multimedia products detailing the project include audio stories and a photo album.

Peace Journalism project in Cyprus. This included lectures at Eastern Mediterranean University, and a Peace Journalism and Migration seminar at the Cyprus Community Media Centre in the buffer zone in Nicosia. For more, see the April 2014 Peace Journalist magazine.

The center’s director participated in the Sustained Humanitarian Presence Initiative workshop, sponsored by Irish AID and the Swiss Agency for Development and Cooperation. This workshop in Limerick, Ireland for NGO leaders was the first part of a larger project to develop a course to help NGO’s operate more effectively in a crisis area. Steven Youngblood’s  instructional segment at the workshop centered around how NGO’s might most effectively utilize media in a crisis zone.

Symposium-“Doing the Wrong Thing: The Struggle for an Ethical Media,” held at Park University. Video of the event is archived at at http://portal.stretchinternet.com/parkadmin/.

“The Crisis in Mexico: Is Peace Journalism Possible?” A special symposium was held on Feb. 22 at Park University. The event was co-sponsored by the U.S. Institute of Peace in Washington, D.C. Expert panelists includes Cristina Zesatti (Zacatecas, Mexico), and Mary Sanchez (Kansas City Star).

Center Director Steven Youngblood appeared on KCUR-FM (NPR in Kansas City) in December to discuss peace journalism and his book about teaching in Uganda, “Professor Komagum”.

Bronx Peace Media Project–A peace media project was held in October 2012 in the Bronx, NY. It featured two peace journalism seminars for journalists and students at BronxNet. Among the discussions: the concept of forgiveness, even for the worst among us. Students went out into the streets to initiate a discussion about if Osama Bin Laden should be forgiven.

Peace media/counterterrorism project–A peace media and counterterrorism program launched in Dec., 2011 and continued in 2012. The project brought together media and security officials to in Uganda to establish frameworks of cooperation on anti-terrorism efforts. It was funded with a $150,000 State Dept. grant.

The Center for Global Peace Journalism at Park University promotes the concepts of peace and peace journalism through seminars, lectures, and courses worldwide, through its website, social media, and Peace Journalist magazine, and through partnerships with like-minded organizations and individuals. 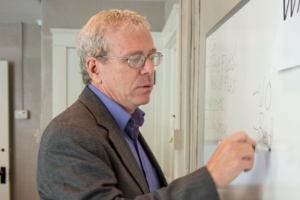 Steven Youngblood is the founding director of the Center for Global Peace Journalism at Park University, where he is also a communications professor. He has organized and taught peace journalism seminars and workshops around the world. Youngblood is a two-time J. William Fulbright Scholar (Moldova 2001, Azerbaijan 2007), and author of “Peace Journalism: Principles and Practices” (Routledge/Taylor and Francis-2016) and “Professor Komagum” (2013). He edits “The Peace Journalist” magazine, and writes and produces the “Peace Journalism Insights” blog. He has been recognized for his contributions to world peace by the U.S. State Department, Rotary International, and the United Nations Association of Greater Kansas City.